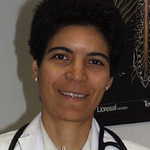 Dr. Rosabel Young is originally from Ft Worth, Texas. She graduated from the University of Chicago and the University of Illinois with both an M.S. in Pharmacology and an M.D. in 1987 under a MacArthur Fellowship. She then moved to California for her Residency in Neurology at UCLA and completed Fellowships in Neurophysiology (Epilepsy & Neuromuscular), and Movement Disorders in California and Texas. She is Board-Certified in Neurology, Neurophysiology, and Brain Injury Medicine. From 1995-2005 she served on the Oral Board Examiners Committee for the American Board of Psychiatry and Neurology, serving as Team Director for the General Neurology Examinations in 2003-2005. Since 1997, she has managed her own private practice and now has offices in Inglewood, Redlands, and Orange County, California. Dr. Young has been performing Workers Compensation evaluations since she became certified as a Qualified Medical Evaluator in 1998. She is also a Civilian Medical Examiner for U.S. Military personnel with PTSD and Traumatic Brain Injury. Her treatment practice includes brain trauma, spinal injuries, memory disorders, Parkinson's disease, toxicology and pharmacology. In addition to these professional activities, Dr. Young, who is fluent in Spanish, volunteers doing pro bono consultations and giving lectures for the California Regional Centers and patient advocacy groups. Dr. Young is next scheduled to speak at the Church of the Rock in San Bernardino, California on June 6, 2016. She will be speaking on “Drugs: The Good, the Bad, and the Ugly” in Spanish and English to our colleagues from the San Bernardino Regional Center. A moment of silence will be observed for victims of the terrorist attack that took place there on December 2, 2015.